There is a distinct difference between tithing vs giving, and it all comes down to our motive. Let’s take a look at some of the most popular passages of scripture that are often misused to get church attendees to give money. 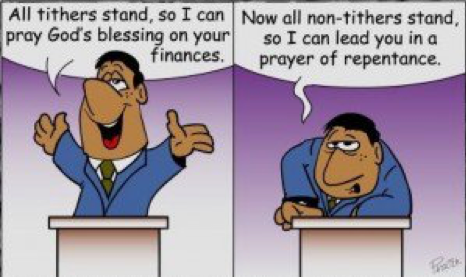 Cain and Abel were the first record in the entire Bible of someone bringing an offering to God. Remember this was long before the Law and the 10 Commandments were ever introduced, and they gave God an offering out of free will. There was no stipulation that demanded they should give anything to God or to the church, because the church didn’t even exist yet.

In Genesis 14 we have the first record of someone actually “tithing” in the Bible, and then he didn’t even tithe from out of his own possessions, but gave a tenth of the spoils from a battle he’d just won. Abraham had just defeated the four kings with his 318 men:

There was no person nor any law that forced Abraham to tithe, because the Laws of Moses were only introduced 430 years later:

Gal 3:17 What I mean is that God made a covenant with Abraham and promised to keep it. The Law, which was given four hundred and thirty years later, cannot break that covenant and cancel God’s promise. (GNB)

Because so many ministries these days are facing financial difficulties, they often “encourage”their members to “give” generously to the work of the Lord. Unfortunately most of the time the Bible verses used and the motives given are Law-based. Note the following saying: If it’s God’s will, it’s God’s bill. If He leads He feeds.

If a ministry were really commissioned by God and the people established in Grace, the leadership would never have to preach on tithing because the members would automatically give out of a motive of love. They would feel they are actually contributing towards something significant and not feel they HAVE to give just to help their ministry’s struggling cause. When God really commissions a ministry He always provides for that ministry and its people supernaturally. God equips the called.

The following is a short extract from Matthew Henry’s Concise Commentary on the Book of Malachi: Malachi was the last of the Old Testament prophets, and is supposed to have prophesied B.C. 420. He reproves the priests and the people for the evil practices into which they had fallen, and invites them to repentance and reformation, with promises of the blessings to be bestowed at the coming of the Messiah.

The prophet Malachi was rebuking the nation of Israel for forsaking God and not keeping the Law of Moses, which included tithing. And what were the results of breaking these laws? Curse upon curse (see Deuteronomy 28:15 onwards). But we know that we are not under the Law of Moses and its curses anymore, because Christ became a curse for us (Galatians 3:13). Now with this in our minds, let’s read these often misunderstood verses:

Mal 3:6 “For I am the LORD, I do not change; Therefore you are not consumed, O sons of Jacob. 7 Yet from the days of your fathers you have gone away from My ordinances and have not kept them. Return to Me, and I will return to you,” says the LORD of hosts. But you said, “In what way shall we return? 8 Will a man rob God?”“Yet you have robbed Me. But you say, “In what have we robbed You?” “In the tithe and the offering!  9 You are cursed with a curse; for you are robbing Me, the nation, all of it. 10 Bring all the tithe into the storehouse, so that there may be food in My house. And test Me now with this, says Jehovah of Hosts, to see if I will not open the windows of Heaven for you, and pour out a blessing for you, until there is not enough room. 11 And I will rebuke your devourer, and he shall not decay the fruit of your ground against you; nor shall your vine miscarry against you in the field, says Jehovah of Hosts. (NKJV)

Oftenverse 10 (above) is used by preachers to encourage people to give and to “test” God’s faithfulness. This is Law-based preaching again because this teaches that only if people do their part then God will do His part. But actually God has already proven His love and faithfulness towards us:

Rom 5:8 But God has shown us how much he loves us: it was while we were still sinners that Christ died for us! (GNB)

In fact God never has to do a single thing again to prove Himself faithful, because He has already given his most treasured gift: His own Son!

And the most ironic thing is this: When people are recommended to “test God’s faithfulness, they are normally also given the bank account details or very conveniently told where they can deposit this money with which they intend to “test” God.

In Part 2 of this series we will explore the principle of “giving” in the New Covenant, and how vastly it differs from “tithing” in several different aspects.