In Part 1 of this series we looked at the reason behind God gave the Old Testament Law to Israel and why He never meant for us to live under it. In this article we will see why it’s impossible to actually try to live according to the Law.It’s quite amazing how some modern day preachers want to put on God’s children the laws and regulations which they themselves can not fulfill, nor the Israelites (Jews) could live by for hundreds of years. Paul said in Galatians 2:Gal 2:14 But when I saw that they were not straightforward about the truth of the gospel, I said to Peter before them all, “If you, being a Jew, live in the manner of Gentiles and not as the Jews, why do you compel Gentiles to live as Jews?” (NKJV)The Galatian Christians didn’t renounce Jesus as being their Messiah, but legalistic Jews had convinced them that they couldn’t be right with God by only believing in what Jesus had done. They were being told they also had to keep the Old Testament Law in order for God to accept them. The same lie is being propagated today, except now it’s said we have to be holy. “We have to be holy, or the Lord won’t accept us or answer our prayers”, etc. Lots of people love to quote Lev 11: 44-45 out of context, where God tells Israel: “Be Holy, for I am holy”.Now we know that living a holy life is not a bad thing, but when we try to live holy in order to gain God’s approval, it is not the Gospel.In Paul’s day, the issue was circumcision. Today, the same legalistic message is being preached using things like prayer, Bible study, church attendance, and other actions of holiness as necessary actions for God to love and accept us. But we know that faith in what Christ did for us is enough! It is not what Jesus did for us, plus our actions of holiness. Jesus plus anything equals nothing. Jesus plus nothing equals everything. No one argues that we shouldn’t pray, study the Word, fellowship with other believers, etc. but any time it’s proclaimed that God is angry with us if we fail to do these things, it’s not the true Gospel. That type of teaching puts the burden of salvation on us and opens us to the condemnation of the devil. This is what Paul called a perversion of the Gospel:Gal 1:6 I marvel that you are turning away so soon from Him who called you in the grace of Christ, to a different gospel, 7 which is not another; but there are some who trouble you and want to pervert the gospel of Christ. (NKJV) 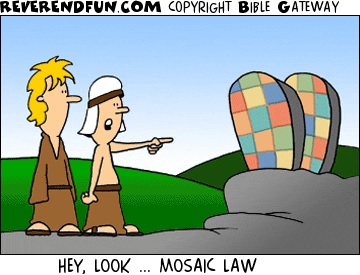 A person who claims that others must adhere to even one regulation stated in Mosaic Law (written Law of Moses) is bound by the whole Mosaic Law:  Gal 5:3 And I testify again to every man who becomes circumcised (a stipulation of one of the Mosaic laws) that he is a debtor to keep the whole law. (NKJV, annotations added) Someone cannot just choose to adhere to one (or some) law and not adhere strictly to all the others, or this would literally demonstrate Pharisaic hypocrisy. Acts 13:39 and by Him everyone who believes is justified from all things from which you could not be justified by the law of Moses. (NKJV) By simply putting our faith in Jesus (who obeyed all the laws on our behalf), our sin (sinful state) is imputed (carried over or given) to Him, and His righteousness is given to us as a free gift! Many people also love to quote Romans 3:23 out of context, making God’s children feel guilty and conscious of sin: Rom 3:23 for all have sinned and fall short of the glory of God. (NKJV) But let us read this in context, from verse 21 to verse 24:   Rom 3:21 But now the righteousness of God apart from the law is revealed, being witnessed by the Law and the Prophets, 22 even the righteousness of God, through faith in Jesus Christ, to all and on all who believe. For there is no difference; 23 for all have sinned and fall short of the glory of God, 24 being justified freely by His grace through the redemption that is in Christ Jesus (NKJV) This means that now the Father doesn’t just see us as if we had never sinned, He sees us as if we had also obeyed all the laws our entire life! Jesus took upon Himself what we deserved (our punishment) and gave to us what He deserved (the Father’s approval & blessings for 100% complete obedience). Wouldn’t you agree that this sounds like a pretty good deal?